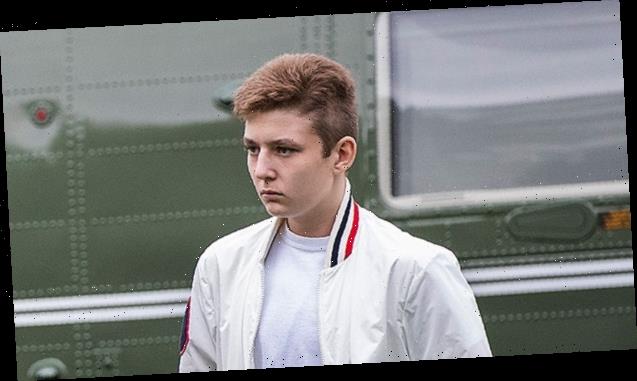 Once again Barron Trump has people talking about how incredibly tall he is at just 14-years-old. At the RNC, VP Mike Pence only came up to Barron’s chest when they stood together.

Barron Trump had a major growth spurt from the time his dad Donald Trump, 74, became president in Jan. 2017 until now. Usually he’s seen next to his 6’3″ father coming and going from the White House, so while his tall height is noticeable, it isn’t downright startling. It was tonight at the Aug. 27 closing night of the Republican National Convention, when Trump introduced Vice President Mike Pence to the audience and everyone stood to applaud him. Barron was seated to Pence’s left and when they stood next to each other, 61-year-old Pence didn’t even come up to the 14-year-old’s shoulder level.

As usual there were plenty of jokes about how the teen belongs in the NBA already, since he’s at least 6’6″ and still growing. @CAAARRLL89 tweeted, “Barron Trump needs to get the f**k out of that family and get up in the gym start putting up some shots. @ForAmerica wrote, “Barron Trump is 6’11. You can’t tell us otherwise,” and user @kaathyd responded, “@ForAmerica My husband is 6’8″ and that’s about how tall I think Barron is just by doorways and other easy measurements.” Other fans used GIF’s of car chases and named various top college basketball coaches who were on the way to recruit Barron.

His mom Melania Trump, 50, has done a good job of keeping her son out of the public eye as much as possible throughout his dad’s presidency. But as a result, sightings of Barron have been few and far between. So it seems like every time he hasn’t been seen in months, he’s noticeably taller than the last time he appeared before cameras.

Barron appeared just slightly taller than his dad when he arrived with his parents back in Washington D.C. on Feb. 2 after watching the Super Bowl at the family’s Mar-a-Lago estate in Palm Beach FL. Former model Melania is 5’11”, so height is in her son’s genetics. But when boarding Air Force One in Morristown, New Jersey on August 16, he suddenly was towering over his father, with a noticeable amount of growth in just six months time.

As evidenced in the photo above when Barron stood with dad Donald at his Jan. 2017 inauguration, he was very tall for being two months shy of his 11th birthday. He was already as tall as 5’10” VP Pence, but still nowhere close to his dad’s stature. Now with the presidential election coming in 68 days, shy First Son Barron might have the chance to go back to being a private citizen should his dad lose to Democrat Joe Biden, 77, and he can keep his growth spurt out of the public eye.