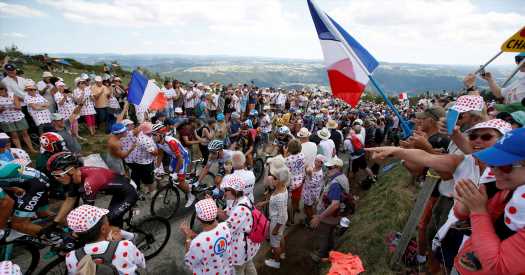 BRIOUDE, France — Like a lost love, the Tour de France gains in value for riders who can’t race in it.

That was the lesson Thibaut Pinot learned last year when the French rider, who’d fallen sick at the Giro d’Italia in May, then missed the Tour and watched on television as others wrote history at cycling’s showcase race.

“It was no fun,” he recalls. “I realized how important the Tour is for a French rider.”

With the race shifting its attention to the toughest climbs to come in the Pyrenees and Alps, Pinot is not only lighting up TV screens but also is most definitely in the picture among top contenders for overall victory in Paris on July 28.

With no Tour winner for French fans to cheer for since Bernard Hinault in 1985, Pinot is third overall and heads into the Tour’s second week looking like France’s most credible contender in years.

Unlike Julian Alaphilippe, the punchy, exciting yellow-jersey wearer from France who wowed in week one but who is dreading the high-altitude ascents, Pinot is looking forward to them.

“That’s where I get the most pleasure,” he said Sunday before the start of Stage 9, a hilly trek through the Massif Central mountains won by South African Daryl Impey, while Pinot and all the other top racers took it easy behind, saving their strength.

Pinot excelled with the Groupama-FDJ squad in the Stage 2 team time trial, losing just 12 seconds to defending champion Geraint Thomas and his teammates at Ineos. That performance raised French hopes that Pinot might also be able to also limit damage in the individual time trial, upcoming on Stage 13 and where former track specialist Thomas should excel.

But it is anyone’s guess as to which of them will get the upper hand on the climbs. On Stage 6, the first mountain stage, Thomas couldn’t seriously distance Pinot, who rode in just two seconds behind him.

On Stage 8, it was Pinot who gained time, surging ahead with Alaphilippe and frustrating Thomas, who crashed and couldn’t catch back up with them.

The gap between them didn’t change on Sunday’s Stage 9. Top contenders took a breather, allowing Impey and 14 other riders who aren’t threats for the overall title to build up the biggest lead of any breakaway this year, as they raced off far ahead for the stage win. Thomas is still fifth overall, 72 seconds behind Alaphilippe and 19 seconds behind Pinot.

Most striking about Pinot is his seeming serenity. Since a podium finish in 2014, he has sometimes looked lost under the pressure of French hopes. This year, he trained at altitude in February and is enjoying having Alaphilippe around to soak up French attention as the race leader.

“If someone had told me that I’d be third overall after the first week, I would have signed up straight away. I wouldn’t have believed it,” Pinot said.

Alaphilippe knows his days in yellow are numbered. Not a climber like Pinot, he’s expecting to suffer on the Tourmalet climb to be scaled on Stage 14 in the Pyrenees.

It “is going to be terrible for everyone,” he said. “The rankings will change a lot.”

Understandable, then, that Thomas, Pinot and others eyeing the podium in Paris opted for a go-slow on Sunday’s 106 miles of undulating hills peppered with three climbs of note between the former coal mining center of Saint-Etienne and the agricultural town of Brioude.

Such days are tailored for other riders not chasing the overall title to shine.

Impey was that man. He beat Belgian rider Tiesj Benoot in a two-man sprint at the finish to become only the second South African stage winner at the Tour — Robert Hunter also won a stage in 2007.