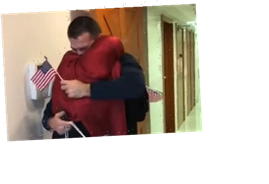 Last month, Omar Albakkour had his visa interview at the embassy in Abu Dhabi.

He and Avery Mills, though fan-favorites on 90 Day Fiance, spent a painful amount of time apart.

More recently, Avery has been living and traveling with her husband within the United Arab Emirates.

Now, Avery has a little update to share with fans.

Omar and Avery were waiting for this news.

They even released a full video on their YouTube channel to document it.

Omar has been approved for his visa.

Avery and Omar can now come to the United States to live together as a married couple.

As you can see from the video, the two of them are positively jubilant.

They even had little American flags to wave around. Absolutely heartwarming to see!

We absolutely hate to bring up the political side of things.

For many people, 90 Day Fiance is an escape from the horrors of recent years.

But it’s a reality show that takes place in our world, and real-world politics impacts many of the stars.

This has been the case for Omar and Avery, and you cannot honestly discuss their story without acknowledging this.

It wasn’t fate or chance or bad luck or even the civil war in Syria that prevented Omar from coming to America with Avery right away.

Disgraced former president Donald Trump issued what was commonly advertised as a “Muslim Ban” in 2017, his first year in office.

One of the first nations whose people were targeted by the white nationalist policy was Syria.

Omar is from Syria, a country beseiged in a civl war waged by its brutal dictator. He could not return to America with Avery.

So Avery returned to the United States without her husband even though the two married.

Avery worked and saved money for their life together.

She also consulted an immigration attorney, who noted that Omar would need a waiver to come to America — with only a 5% chance of getting one.

In 2020, amidst the COVID-19 pandemic and no end in sight to the wait to see Omar, Avery was done twiddling her thumbs.

She traveled to see her husband and reunite with him.

The two toured the United Arab Emirates for months, and fans were overjoyed at their happy photos.

Obviously, after the November election (and after the January 6 coup attempt by pro-Trump insurgents failed), things are different.

We have previously discussed how some couples, including Avery and Omar and also Angela and Michael, may benefit from the Biden Administration.

Without any white nationalists controlling immigration policy, there was hope for visa approval.

Avery has had to clap back at fans and even a couple of castmates for their politically less-than-astute cases over the years.

It’s horrible when vicious prejudice exists at all, but it feels even more personal when it impacts your life.

We here at THG are overjoyed for Avery and Omar and wish them boundless happiness.