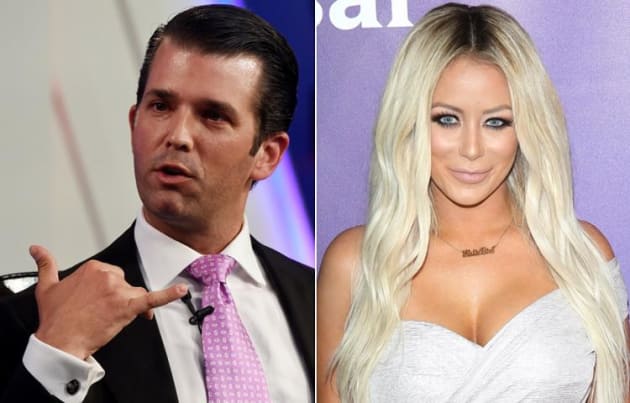 On the surface, MTV’s Ex on the Beach is just another anonymous reality show in which scantily-clad twentysomethings down fishbowl-sized cocktails and compete to exchange fluids.

And it might have gone down in flames alongside the disaster known as Lindsay Lohan’s Beach Club, were it not for the producers’ brilliant idea of casting already-established nutjobs from previous series.

And now, the similarly-psychotic Aubrey O’Day is being trotted out to spice up season 2:

You might remember Aubrey from her role on Making the Band or as the ex-girlfriend of Jersey Shore‘s Pauly D.

But O’Day’s most recent tabloid headlines have to do with her affair with Donald Trump Jr.

The president’s large adult son slept with O’Day several times while he was still married to Vanessa Trump.

Don Jr. and Vanessa got divorced back in February, but Young Donald wasn’t single for long.

He began dating Fox News anchor Kimberly Guilfoyle before the ink was dry on his divorce papers.

And in case you were one of the very few people who wondered exactly what Aubrey thought about all of this, fear not!

Because we’re alive during the weirdest time in human history, you’re about to learn new details about the president’s son’s love life from an MTV reality show!

According to a new report from TMZ, O’Day will talk about Don Jr. a lot during the upcoming season of Ex.

And we’re guessing she didn’t need much coaxing in that direction, as DTJ seems to be her favorite topic of discussion!

TMZ sources who have viewed footage from upcoming episodes say Aubrey sounds off on all things Trump whenever she’s given the opportunity.

Apparently, she describes Don Jr. as her “soul mate,” and she bashes Guilfoyle as “crazy-looking.”

At one point, Aubrey even begs Don Jr. to dump Guilfoyle so that the two of them can get back together.

Something tells us that won’t be happening anytime soon.

For one thing, Guilfoyle has the presidential seal of approval, and it’s been rumored that she and Lil Donnie are quite serious these days.

On top of that, Vanessa Trump was pregnant during Don’s time with Aubrey, so you can bet he won’t be re-opening that scandalous chapter from his past with an election fast approaching.

But hey, if you believe Aubrey, the Trump political dynasty will soon be coming to an end regardless.

“The White House fiasco is about to be over,” she reportedly told MTV.

Maybe Aubrey knows something we don’t.

Or maybe she’s just planning to transition into a career political pundit once the reality gigs dry up!