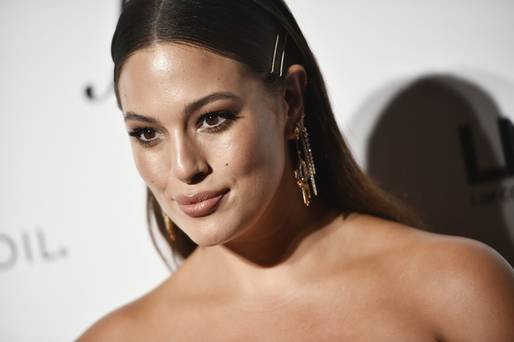 The 31-year-old model and her husband Justin Ervin announced on Wednesday, their ninth wedding anniversary, that they are expecting their first child together.
Ashley wrote on Instagram: “Nine years ago today, I married the love of my life. It has been the best journey with my favorite person in the world! Today, we are feeling so blessed, grateful and excited to celebrate with our GROWING FAMILY! Happy anniversary, @mrjustinervin Life is about to get even better.”
She also posted a video of themselves, where they zoomed out the camera to show Ashley’s baby bump before saying “surprise”.
The pregnancy comes as a surprise, as Ashley said in January that she is not ready for kids as she wants to focus on her career for now.
She said: “For me, being a wife and being a woman, happiness doesn’t equate to having kids. Kids will come when they come. Happiness right now, is building with my husband and building my business.”
Speaking in June, she added: “Kids are just not on my radar. Not now. Eventually, yes. I’ve been married for nine years in August but I feel like I’m still too young to have them. I’ve got too many businesses still to build.”
Meanwhile, Ashley has previously revealed she and Justin keep their relationship fresh by having lots of sex.
Ashley said: “Just have sex. Have sex all the time. Even if you don’t feel like it, just have sex. I have found that if we haven’t had sex, we get snippy, and then if we are having sex, we’re all over each other. For us it’s like, ‘Oh, let’s have sex.’ And then we’re just right back in a great mood.”
The brunette beauty met her beau at church when she was just 21, and the pair made the decision not to have sex until they got married in 2010, and Ashley confessed she was “building trust” to decide if Justin was someone she wanted to be with for the “rest of her life”.
She explained: “Something that it did for us was build up our friendship, and it also built up our trust and communication Of course we were sexually attracted to each other; we would make out heavily.
“All those things were there. I wasn’t worried about, ‘What’s sex gonna be like with him?’ It was more, ‘Do I trust him? Is he someone I want to be with for the rest of my life?'”

Nine years ago today, I married the love of my life. It has been the best journey with my favorite person in the world! Today, we are feeling so blessed, grateful and excited to celebrate with our GROWING FAMILY! Happy anniversary, @mrjustinervin ❤️ Life is about to get even better. ?