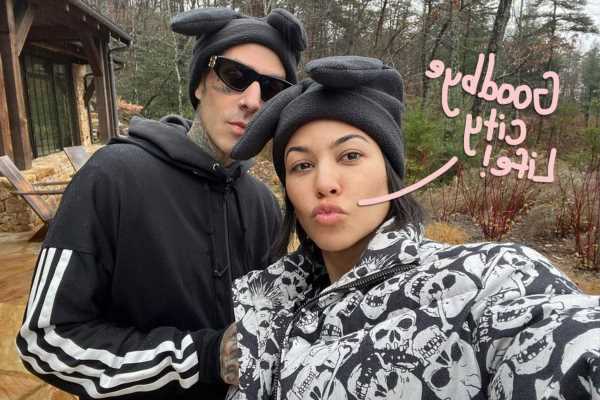 Kourtney Kardashian and Travis Barker may just be teasing their next great adventure.

The happy husband and wife just enjoyed a relaxing getaway to Tennessee for the Blink-182 drummer’s 47th birthday, and the fun may not be over! Travis posted a photo dump of the trip to his Instagram, which he captioned, “Spent my birthday in Tennessee.”

Ch-ch-check it out (below):

Looks like they had a great time, right? Maybe too good! Because Kourtney playfully commented:

She added the cowboy hat and glass of whiskey emojis, to which the father of three replied:

Dang, they must have had a REALLY good time to already be discussing the possibility of relocating there!

Kravis can be seen sporting their signature goth attire, with Kourtney wearing a skull-print puffer, black boots, and a matching black bunny ear hat with her man. The pair can also be seen scaling the side of a rock wall, and spending some quality family time!

As you can see in the above pics, the lovebirds were joined by 16-year-old Alabama Barker, whom the drummer shares with ex-wife Shanna Moakler, and his 23-year-old step daughter Atiana De La Hoya, whom Shanna shares with professional boxer Oscar De La Hoya. It’s not clear if the couple’s other kiddos were there — or if they’re down to move such a different world from El Lay.

Some fans weren’t so pleased with it either, as some replies to Kourtney’s comment were straight up begging her not to:

However, they didn’t speak for everyone as some other fans did indeed show their support:

“I said this when I went too. Something about it”

“moved from nor-cal to east Tennessee an loving it every thing is slower an it makes you take a step back an just enjoy the little things it’s a much simpler way of life an better place to raise kids..I think you would love Tennessee”

Another fan chimed in writing, “You should move to Tennessee get out of Hollywood,” to which Travis responded with the most this has sounded real yet:

Dang!! Fans of Keeping Up with the Kardashians will know the momma of three has talked about uprooting for a while now, so maybe finding a partner to do it with is just the final push she’s been needing! If that does ever happen, we know that she’ll likely have little sis Khloé Kardashian’s support, as the 38-year-old called the post “the cutest.”

Awww! We’re so thrilled to see Kourt in such a happy and unproblematic stage of her life! We’re with her all the way! Not only that, but this could make GREAT TV. Just think about it — what could be more compelling than watching a rock god and a reality star trying to figure out life in the rural South? Not to mention watching Alabama Barker trying to navigate school there! It’s genius!

But what are YOUR thoughts on the potential change of scenery, Perezcious readers? Should they make it permanent? Sound off in the comments (below)!