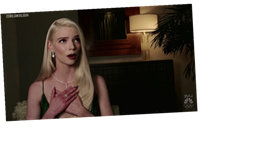 It was “checkmate” for Anya Taylor-Joy at the 78th annual Golden Globe Awards as the Queen’s Gambit star secured her first career win on Sunday. During Sunday’s award’s ceremony, hosted by Tina Fey and Amy Poehler, the Peaky Blinders and New Mutants actress took home the best actress in a limited series, anthology series or motion picture made for television prize.

Upon receiving the her first Golden Globe award from Rosie Perez, Taylor-Joy thanked her fellow nominees who she said she has come to know upon watching their projects during lockdown. The Queen’s Gambit star bested fellow nominees Nicole Kidman, Shira Haas, Daisy Edgar-Jones and Cate Blanchett.

In her brief acceptance speech she also thanked Netflix, the HFPA and series creator Scott Frank.

“Thank you for being part of this journey, thank you for trusting me with Beth,” she said.