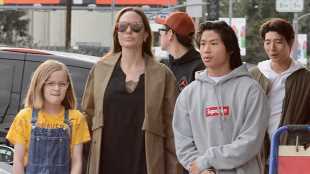 Even Angelina Jolie can’t resist a good roller coaster. The ‘Maleficent’ star took her kids for a fun-filled day at an amusement park, and she even got strapped into one of the fastest rides in the world!

If Angelina Jolie, 44, was afraid when she was strapped into the Stealth roller coaster on Sept. 15, she certainly didn’t act like it. The Maleficent: Mistress Of Evil star kept her cool while boarding what Daily Mail notes is “the fastest roller coaster in the UK.” Even when the car took off like a shot, Angie just smiled. Perhaps she was happy that she could share this thrill with her family? Angie was joined by five of her six children — Pax, 15, Zahara, 14, Shiloh, 13, Vivienne, 11, and Knox, 11 — for an exciting day at Thorpe Park in Staines-upon-Thames in Surrey, England, and a delighted fan captured the whole goings-on with their phone. (CLICK HERE TO SEE THE FAMILY TRIP PICS)

All that was missing was Maddox, but the 18-year-old was busy in college in South Korea. Angie dropped her eldest child off at Yonsei University in August and seeing her baby boy grow up left tears in her eyes. “Oh my god, [I had an] embarrass your children ugly cry!” she said during the 2019 D23 Expo. “I also, just at some point, had the big [sun]glasses and the amount of times I turned and waved. I do know it was the one moment in my life I think I turned around six times before the airport just…and he sweetly stayed and kept waving, knowing that I was going to keep turning around. You could feel he knew he couldn’t leave.”

Since dropping off Maddox, Angie has made time for each and every one of her kids. In addition to this trip to Thorpe Park, she took Shiloh, Zahara, and Pax for lunch on Labor Day. Angie took Shiloh and Maddox shopping in late August, days before she was seen running errands with Zahara.

“When your children are little, you feel more ‘mommy.’ “ Angie told HELLO magazine in September. “When they are teenagers, you start to remember yourself as a teenager. You see them going to punk clubs, and you wonder why you can’t go. I’m in this fun moment where I’m rediscovering myself.” Hey, if Angie wants to accompany Shiloh to a War On Women show, her young daughter would probably be into it.

Don’t expect Maddox to invite his father, Brad Pitt, 55, to catch No Brain, Find Your Face, or any other Korean punk band soon. “Whatever happens, happens,” he said when asked about the possibility of his dad visiting him. Whatever happens will not be any of Angie’s business, as a source EXCLUSIVELY told HollywoodLife that she’s “letting Maddox call the shots” when it comes to his strained relationship with Brad.