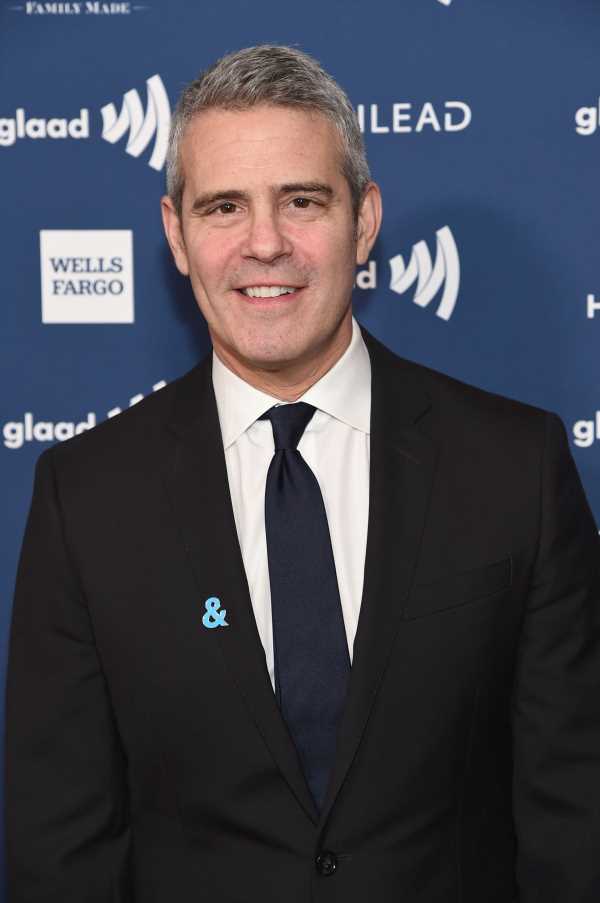 In my next life, I want to be Andy Cohen, because he gets to hang out in the Bravo clubhouse with all the cool kids. I mean, name someone with a doper job, I dare you. Wait, is doper a word? Whatevs, in the spirit of live TV, I’m going with it because Cohen just hit a major milestone, ICYDK. He’s been getting guests to spill the tea on his boozy late-night chatfest, Watch What Happens Live, for a full 10 years now. Man, that went fast, didn’t it? So, how does it feel to have spent an entire decade hosting such an iconic talk show? Well, Andy Cohen’s comments about WWHL‘s 10-year anniversary reveal that it’s been a wild, star-studded ride, but that the show’s low-key vibe still endures.

When WWHL first premiered in 2009, it only aired once a week and the bench was basically filled with a revolving door of what I call Bravolebrities and Real Housewives. Now WWHL is a five-times-a-week event, with major celebs like Chrissy Teigen, Kim Kardashian, Lady Gaga, Nick Jonas, and John Mayer rolling up on the daily to drop major truth-bombs. There’s the time Shania Twain admitted to peeing on stage, the time Naomi Campbell shaded Kendall Jenner’s modeling career, and that time Cohen got Gwyneth Paltrow to cop to trying ecstasy.

Celebs spilling tea just never gets old. So how does Cohen do it? How does he get his guests to step outside their comfort zones and give up the goods — all while remaining so damn likable?

"I’ve always just gone there with my friends," he explains to Elite Daily. "I mean it’s weird that I’m doing it on TV now. I was with a group of friends that I’ve been friends with since high school the other night, and I was just totally instigating with them. It’s just in my blood, what can I tell you."

I’m sure all those Clubhouse cocktails don’t hurt, either.

Cohen — who recently partnered with Lipton to produce "Andy Spills Tea" videos for the brand’s social channels — is now just about as recognizable as the huge personalities he sits next to, but one of the things viewers love most about him is that he remains such a fan at heart — even if he doesn’t always remember his guests’ names.

Gotta love that kind of honesty, and that’s obviously a big part of what makes Cohen so endearing to viewers. And speaking of the audience. Cohen says it’s important to listen to fan feedback on social media, but he admits that he was taken aback by the reaction to the most recent season of The Real Housewives of Beverly Hills, which featured the much-maligned "puppygate" storyline that spiraled out of control.

Long story short: Dorit Kemsley adopted a pup from Vanderpump Dogs, but she had to give it away to a new family after it bit two of her family members. It was reported that the dog ended up in a shelter, unbeknownst to Kemsley, and someone leaked the story to the press. The majority of the cast blamed Lisa Vanderpump for the leak and the scandal led to the breakdown of Vanderpump’s longtime friendship with Kyle Richards, and culminated in LVP’s exit from the show.

"It turned into such a thing where there are these accusations of bullying, and I think it’s been really overblown on Twitter," Cohen explains. "I think if you look at the ratings, and you look at the general consensus, it’s not as aggressive as Twitter would have you suggest. Lisa has incredibly passionate fans, and I don’t blame them. They should be. She is someone to be passionate about."

So does he think Vanderpump will return to RHOBH one day, then?

"I hope so," he says. "Listen, she started the show with Kylie and Kim [Richards] and those originals, and so I hope so. I just think, at this moment, it’s too hot for her. But I think she and Kylie will be friends again. This is not worth ending a friendship of many years over. But what do I know?"

You heard it here first, kids!

In between effortlessly getting celebs to spill the tea, Cohen found the time to make moves in other areas of his life.

Case in point: He’s a dad now. He welcomed son Benjamin Allen via a surrogate in February 2019. And even though he’s got a ton on his plate — besides WWHL, he’s the executive producer of Real Housewives, he’s got his Sirus XM radio show, and his tour with Anderson Cooper — Cohen says he really hasn’t had to change his schedule too much to accommodate the little guy.

Benjamin has been to the WWHL set, though. Cohen even posted a pic of the adorable visit on his Instagram.

Is it weird to be jealous of a six-month-old? Asking for a friend. But seriously, can you even imagine what it’s gonna be like when Benjamin comes back to the set one day when he’s old enough to realize what Cohen actually does for a living?

He spills the tea, Ben. He spills all the tea.