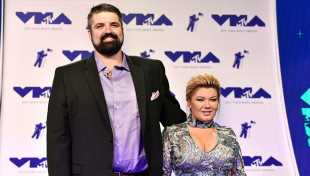 Well this is a new twist in the Amber Portwood domestic battery arrest. A family member of her baby daddy Andrew Glennon  provided alleged audio of their fight on July 5 that led to her being taken into custody. The YouTube site Without A Crystal Ball claims that even though Andrew had been advised by his attorneys not to speak on the incident, the family member had seen her coverage of the story and they had watched the Teen Mom OG reunion where Amber denied she had a weapon and said Andrew made the whole story up. While the audio sounds like Amber and Andrew, we have no confirmation that it is them and have reached out to both parties. You can listen to the audio here. Katherine Paulson, publisher of the Without a Crystal Ball blog, has given her assurance that the audio recording is authentic, but HollywoodLife.com has not independently verified its authenticity.

The drama allegedly started after Andrew woke up Amber from a nap to go to an appointment and a baby can be heard crying. The pair has a 16-month-old son James. In the audio a woman is heard saying, “If you don’t pick him up you f**king fat piece of s**t, I’m going to f**king stab you! Get your fat ass and get him!” and that she’s “looking for a house to leave.”

“I’m not watching him today, you’re f**king stupid!” the woman yells while a man is heard saying, “So you’re just going to throw him at me?” The woman hurls back “I’m not going to watch him today after what you did!” as the man begs, “Babe stop.”

Andrew allegedly had cameras installed in their Indiana home while they were in LA to protect against burglars. “Where’s the camera at in here? Where’s the camera? Show me the f**king camera, bitch!” the woman is heard saying while the man replies, “You chopped it with a sword!” The woman responds, “Because you have cameras in my f**king room, dude! You have cameras everywhere. What kind of life is that.”

“Babe, we were traveling, that’s why it was in the bedroom!” the man says while adding, “Babe I love you more than life itself.” Then things get really ugly as the woman yells “You’re a little f**king p**sy. I bet you if you got in trouble you’d sit there and take on 30 people! Yeah, you would. Because you’d get raped!” The man responds “Babe, what are you even saying right now?”

“Nobody would ever do that, sit there and taking f**king videos of people,” the woman says. “Nobody would do that in a regular relationship. It’s only because I’m on television that you even f**king do that. You’re a scummy little bitch!” The man claims he tried to attack her while she responds, “I wasn’t attacking you Andrew! I will do whatever I f**king please! I am five foot f**king two and for you to sit there and say I f**king attacked you, I will not do this s**t again. I have lawyers up the ass!”

“People say things all the time when they’re pissed off,” the woman says. “That’s not an excuse. And, no [the threat] will not hold up in court.” The man responds, “But to say ‘I’m going to kill you…’” then is interrupted as the woman says, “For you to say that I don’t know anything about court, you need to think again!”  The man replies, “For you to say ‘I’m going to kill you’ is really scary, OK?”

“You are really dumb, OK?” the woman fires back. “For you to even say that is stupid, and r**tarded and you’re an idiot but I will. You should not have woke me up this morning. I told you a million times!” The YouTuber then shows photos of home ring cameras with slash marks on them, claiming that’s what Amber did to them with the sword.