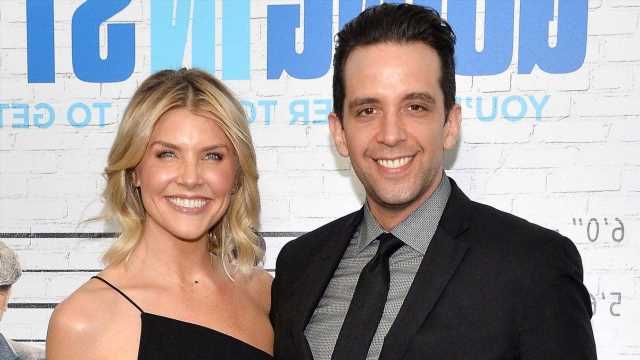 Amanda Kloots believes her book has brought Nick Cordero peace. On Monday’s episode of Entertainment Tonight, ET’s Nischelle Turner speaks to the 39-year-old fitness instructor, who reveals how she came to believe that her late husband found closure through Live Your Life, her book about their relationship, his battle with COVID-19, and her life since his death.

“Jennifer Love Hewitt, who is a very spiritual person, said the most wonderful thing to me,” Kloots shares of the actress, who was one of many celebrities to reach out to her amid her husband’s hospitalization. “… She had a dream about Nick visiting her and taking her on a walk in Laurel Canyon. He said to her, ‘Have you read the book?’ And she said, ‘Yes, I just finished it. Oh my god.’ And he said, ‘I sat by Amanda while she wrote it. I finally know my story. I have closure to my story.'”

Kloots had an emotional reaction to Hewitt’s dream, admitting, “I started crying because I never wrote this book with that in mind.”

While the idea of Cordero being by her side as she wrote his story, and ultimately finding closure through it, wasn’t something Kloots initially considered, Hewitt’s account rang true to her because it sounded like something her late husband would say.

“That’s so [like] Nick to need closure. He wouldn’t have known his story because I never let my negative comments, conversations [into my visits with him],” she says. “When doctor conversations happened in front of him in the hospital room, we would always go outside and I would come back in and I would give him my play-by-play on what was going to start happening, which was usually this uplifting, positive speech. So he never knew. He didn’t know the full story.”

Now, Kloots tells ET, she’d “like to think that dream was Nick trying to tell me, ‘Thank you for writing this book, because I now have closure to my story.'”

Cordero’s illness began in March 2020, right when the COVID-19 pandemic was beginning, but before much was known about the virus. At the time, the couple’s son, Elvis, was not even a year old.

“He was just tired. He didn’t have a cough or fever. There was nothing,” Kloots says of Cordero. “Even Nick was like, ‘I might have this,’ and I was like, ‘Honey, you don’t have this. You’re fine. You’re just tired.'”

Kloots’ belief seemed to be reinforced when an urgent care clinic diagnosed Cordero with pneumonia and refused to give him a COVID-19 test. Things only got worse from there, though.

“The breathing issues really kicked in and he was even more lethargic. It took him a half hour to walk three steps into the kitchen,” she tells ET. “That’s when we both got scared. That’s when I really got scared.”

Eventually, she dropped Cordero off at the hospital, and thus began a 95-day “emotional roller coaster,” during which the Broadway star was put on a ventilator, underwent multiple surgeries, including a leg amputation, and ultimately died.

“Every morning, I would wake up and I didn’t recognize myself,” Kloots says. “… Those 95 days, every day I looked in the mirror like, ‘What is happening? How is this real? What is my life? How is Nick in this situation? How are we in this situation? This shouldn’t be happening to our family.'”

Through it all, Kloots leaned on her family, friends, and social media community, the latter of whom gathered daily on Instagram to sing Cordero’s song, “Live Your Life,” and send their well wishes to him.

“I honestly could not have gotten through this journey without my social media virtual army that came together,” she says. “… It just was this support system every single day. It got me through. It still is getting me through every single day.”

“I have an incredible support group over social media that not only did that, [but also] offered medical advice, offered dinners, meals, things for Elvis that I needed, diapers, baby food,” Kloots continues. “It was insane. It was an incredible amount of support and love. I think it just proved that people innately are kind, that they innately want to help.”

Despite Kloots’ typically positive attitude, following Cordero’s death, she often found herself questioning why he went through so much, fought so hard, only to die in the end. With the help of one of her friends, though, she came to believe that her husband held on until he knew that she, their son, and their families would be all right.

“I really, truly believe that by the time Nick passed, he knew that we were all going to be OK,” Kloots tells ET. “… Our home was finally almost renovated. I had bonded with his mother, which was something that he always wanted and dreamed of… She had really bonded with Elvis, that was another thing Nick always wanted. Our two families got to spend so much time together that we will never, ever have again.”

“These were all dreams that Nick has said that he wished that he would one day have that all happened because of this journey that we went on, because it was 95 days,” she continues. “… He waited. He held, he fought. He fought so hard and I think he let go when he knew we were all OK.”

While Kloots admits that she’ll “never not miss” her husband, she makes a daily effort to live her life with gratitude, joy and love.

“It’s crazy… how quickly your life can change. That’s why still, to this day, I live my life where I don’t take one thing for granted. I don’t take one person for granted,” she says. “When you’re standing and watching someone you love so deeply fight for his life, and you’re fighting for their life, and you’re watching everything kind of slowly deteriorate, it really makes you appreciate and take a different look on life.”

Even with her positive outlook, penning the book, something Kloots did with her sister, Anna, was “so emotional” for her.

“There were nights that I was crying so hard I couldn’t even see the keyboard. It was just kind of like reliving all of this. Not even the pain of reliving it, but just knowing that it’s over. We won’t have more memories. We won’t be able to make more memories. That was always really hard,” she says. “I mean, it kind of just was another way of noticing that my life has changed and that he is gone… Writing the story down kind of made me feel like, ‘OK, this has happened.'”

Kloots fully believes that Cordero is watching over her.

“All the time I say things in my head, or even say them out loud, and ask him for a sign. I did it the other day. I got in the car and I asked him for a sign,” she shares. “I said, ‘Honey, I miss you. Will you send me a sign?’ He usually sends me signs through things on the radio, music. ‘Every Breath You Take’ by The Police came on, which is a song that really reminds me of him… I got chills. And then I turned the channel as it ends, and it’s on literally again… When it’s on the radio, I know it’s a sign from him.”

“That’s one instance, but there are so many,” Kloots continues. “It’s crazy. It’s like I’m having this new relationship with Nick that’s this spiritual relationship.”

Kloots believes the same is true for their son, Elvis, for whom she works to keep Cordero’s memory alive.

“I tell him so much. I am just so persistent [about] keeping him aware that his dada is around,” she tells ET. “We listen to Nick’s music all the time. As soon as I put on ‘Live Your Life,’ he starts banging his head like he’s in a rock band. It’s the cutest thing. We have pictures of Nick everywhere. He kisses this one every night before we go to bed. Before I put him in his crib, I tell him [about] the dreams that he’s going to have and they always entail Nick taking him on some sort of adventure.”

“We talk about Nick all the time,” she continues. “It’s hard to say… what he knows or what he thinks, but I do think that he knows that Dada is somewhere. I think that Nick comes and visits him and spends time with him. I really do.”

Tune in to Entertainment Tonight on Monday for more of ET’s chat with Kloots. Her book, Live Your Life, will be released Tuesday, June 15.