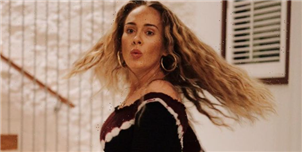 Today is a national holiday—and no, I don’t mean Cinco de Mayo (feel free to get lit if you celebrate it, tho)…I mean it’s Adele’s birthday! And as per usual, your favorite soulful songstress is out here posting pictures on her Instagram to mark the occasion. And lucky us, because this is the first set of pictures Adele has posted all year!

For Adele’s 33rd trip around the sun, she shared three photos—a simple black and white pic of herself smiling, a island snap of her taking a dip in the ocean, and a fun and carefree shot of her twirling her troubles away in a tie-dye dress. I am slightly green with envy:

Though Adele is clearly living her best life ATM, a bunch of people in the comments had one major question on their mind: Where’s the damn album? Welp, here’s all we know so far: Alan Carr, British comedian who happens to be one of Adele’s closest friends, revealed that he heard a portion of the album back in January. “I’ve heard some tracks on it,” he said in an interview. “Oh my gosh, it’s so amazing. It’s so amazing. I said to her, I said, ‘That voice is like an old friend.’ It’s like an old friend.”

Adele also spoke about the development of her forthcoming album in February 2020 while officiating a friend’s wedding, and reportedly told the guests at the event to “expect my album in September.” In June, her manager Jonathan Dickins later clarified that a September release date was not possible. “It isn’t coming in September, it’ll be ready when it’s ready,” he said in an interview with MusicWeek. “I can’t put a date on that yet. We have music, but we’re still working.”

Until then, my ears will be (not so) patiently waiting!

You love all the deets on celebs. So do we! Let’s overanalyze them together.