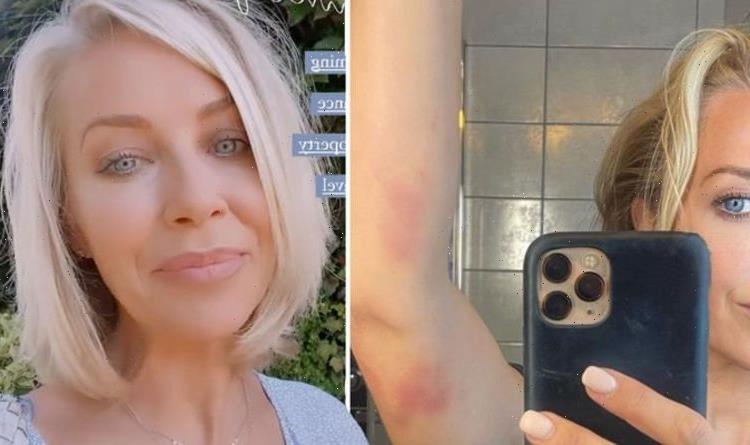 Laura Hamilton says she ‘will never let ITP beat her’

A Place In The Sun star Laura Hamilton is often seen posing in stylish outfits on her Instagram page as she films around Europe for the Channel 4 show. Today, she showed fans a different side to her by revealing the extent of her health issue Immune thrombocytopenia.

The 39-year-old presenter shared a close-up picture of her bruised arms and revealed her gums had also been bleeding during filming.

Both are symptoms of the disorder Immune thrombocytopenia, an autoimmune bleeding disorder characterised by abnormally low levels of blood cells called platelets, which is referred to as thrombocytopenia.

In view of her 136,000 followers, she wrote: “This week I might have posted a few photos in pretty dresses, but this is the reality of what is underneath and what you can’t see…

“I have had bruising on my arms and my gums have been bleeding. This is ITP.

“Immune thrombocytopenia (ITP) is an autoimmune disorder that can lead to easy or excessive bruising and bleeding.

“The bleeding results from unusually low levels of platelets — the cells that help blood clot.”

Laura added that her thoughts were with fellow sufferers as she urged them to not let it get them down.

“Follow your dreams. Anything is possible. There is no need to let it hold you back,” she continued.

K Lymberis commented: “I am also an ITP sufferer, along with other autoimmune diseases.

“Thank you for sharing and posting about this, in an unusual way it’s comforting.”

“Laura like many of your other followers I had no idea about ITP, as you say follow you dreams, you’re truly an inspiration,” added Andy Felthouse.

The mother-of-two followed up her post by posing in a loose blue floral dress.

She later took to her Instagram Story to give fans an insight into her filming in France.

Addressing the reaction to her post, she went on to say: “Thanks to everyone’s comments regarding my recent post about ITP.

“Obviously you can’t see any bruising now but that doesn’t mean it’s not there.

“And I’m sure with anyone who has ITP, hopefully that post resonates with them.

“It’s quite easy to hide bruising, it’s there, I am an ITP sufferer but I’m never going to let it beat me.”