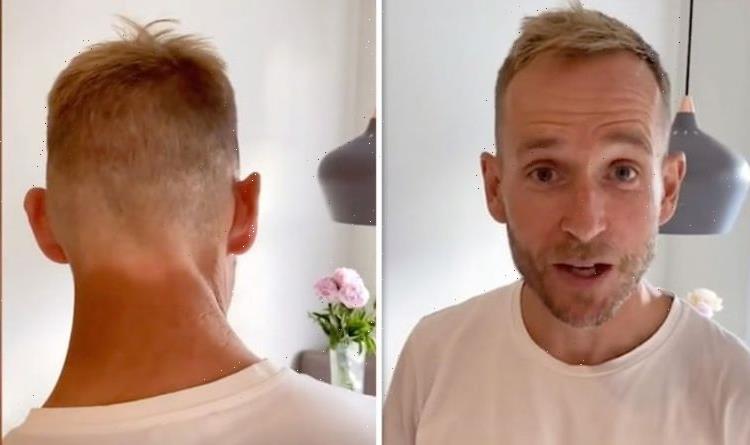 Jonnie Irwin applies fake tan to his head after haircut

Jonnie Irwin, 47, has shared how he has suffered a tan mishap after deciding to shave his hair off into a grade one haircut, due to the warm weather. However, the A Place In The Sun presenter failed to realise the skin beneath his hair line was a lot lighter than his sun-kissed body.

Instead of panicking, Jonnie thought of a resourceful way to blend the pale skin with the rest, as he enlisted a friend to help with a fake tan mitt.

Sharing a snap of the patch of white skin below his hairline, Jonnie typed: “Went for a grade one haircut – hadn’t thought of this.”

He then filmed himself at home in his lounge as he got friend Chloe to help him top up his tan.

Jonnie explained: “I’ve gone grade one for the first time in a long time, I thought it was a good idea in the summer, unfortunately, it’s exposed a bit of white skin.

“So the fake tanning has begun, fingers crossed,” he added hopefully.

Jonnie made his debut on A Place In The Sun alongside Jasmine Harman back in 2004.

The dad-of-three has spoken on his time on the Channel 4 property show, while discussing his responsibilities at home.

The 47-year-old has a busy schedule while juggling filming abroad, shooting BBC’s Escape to the Country and balancing his family life.

Jonnie resides in Newcastle with his wife Jessica, who welcomed twin sons in June of last year.

The couple share three children, all under two; nine-month-old twins Rafa and Cormac, and one-year-old Rex.

Addressing his future on the programme, he explained he had no plans to stop presenting A Place In The Sun but said he needs to “spend more time with his family”.

“I’ve got a lot of responsibility at home now. I’ve got a young family. I’ve got three children under two years old,” Jonnie told Express.co.uk.

“I need to spend more time with my family.”

The small-screen star said that since the arrival of his children, he has reduced the number of days he films abroad.

Jonnie continued: “I used to go away for four to six weeks at a time. Now my filming trips are Sundays to Fridays which is a lot more doable.”

The presenter shared his plans to remain on the Channel 4 property show for as long as possible.

“I want to present [A Place In The Sun] for as long as the programme’s being made. I love the show,” Jonnie gushed.

“I’ve been doing this since I was 30-years-old – footloose and fancy free.

“But now I’ve got responsibilities I want to fulfil but I still want to film the show, and as long as the public want me to present the programme I’ll continue.”

Jonnie, who tied the knot with his wife Jessica in 2016, also explained the sacrifices he has had to make while presenting A Place In The Sun.

The small-screen star confessed the role isn’t as “glamorous” as people often perceive.

Speaking about what he misses most being away from his family while filming is his “Sunday roast”.