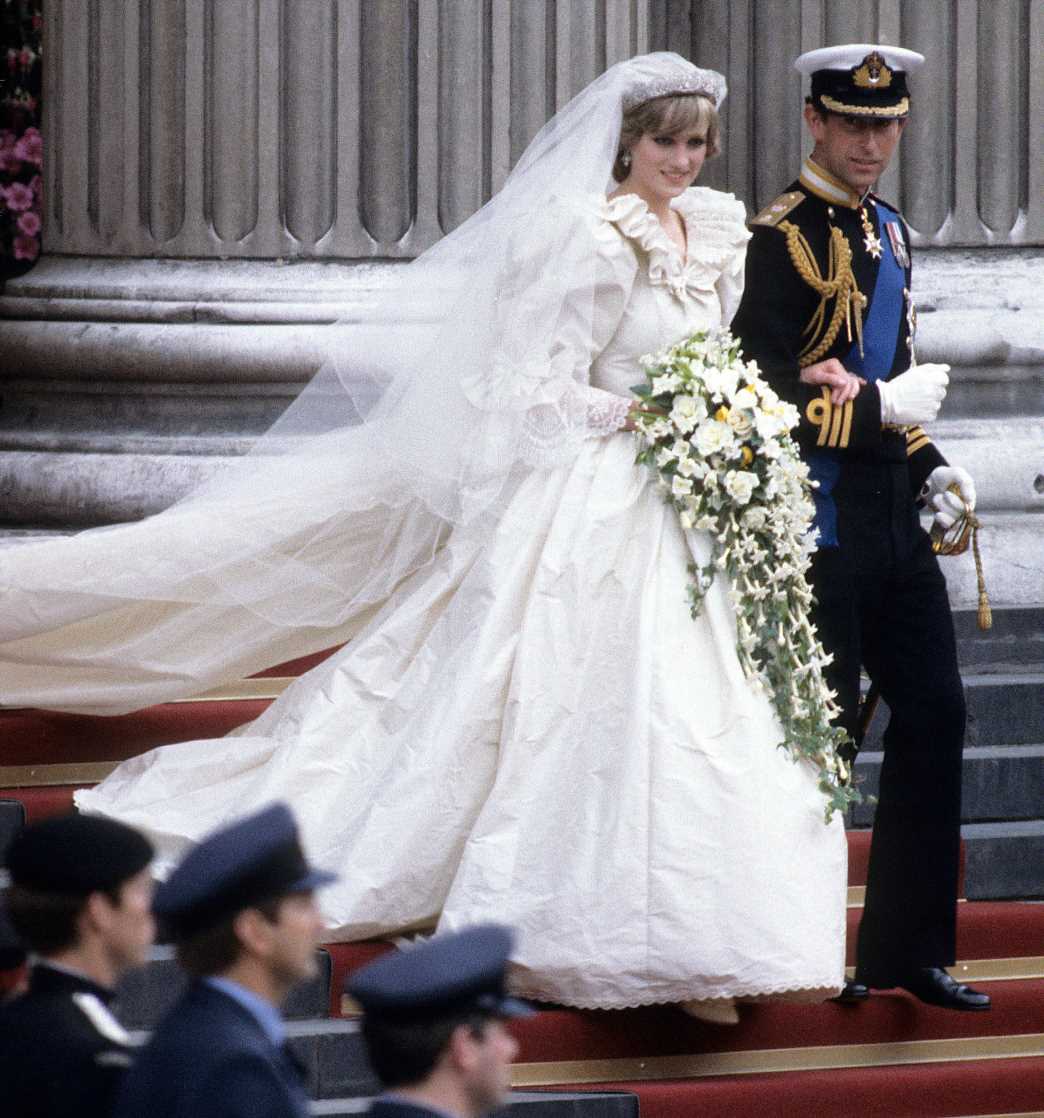 Did you know Princess Diana spilled perfume all over her bridal gown? Or that Prince Charles’ second wife, Camilla, was in attendance at the July 29, 1981 nuptials?

DIANA HAD A 23-INCH WAIST

Designer Elizabeth Emanuel recalls that the young bride-to-be morphed as the weeks elapsed before her July 29, 1981 wedding to Prince Charles, losing a notable amount of the “puppy fat” she had when she first walked in.

“Most brides do lose weight,” Emanuel previously told PEOPLE. “So we weren’t that worried when she did. She was looking fantastic. She ended up with a 23-inch waist from a 26- to 27- inch.

“She just walked more confidently. She just was suddenly growing up, you know? But I think she felt very good about how she looked.”

Diana walked down the aisle of St. Paul’s Cathedral wearing one of her favorite scents: Quelques Fleurs. But according to her makeup artist, it almost wore her.

Barbara Daly famously revealed that the young princess, then 20 years old, accidentally spilled some perfume on her dress as she tried to put some on her wrists after getting dressed in the world famous bridal gown.

According to Daly, she told her to simply hold that spot on her dress as she was walking to make it seem like she was lifting the front of her dress so she didn’t step on it. She was even spotted trying to cover the spot where the perfume spilled with her hand as she approached the altar.

SHE TOLD HER BRIDEMAIDS TO “DO YOUR BEST”

Diana knew her dress’ 25-foot-long train was difficult to handle, and let her young bridesmaids know it. Prince Charles’ goddaughter, India Hicks, recalled to Harper’s Bazaar when she and Diana’s niece Sarah Armstrong-Jones were in charge of guiding it down the aisle.

Hicks said that as Diana entered the catherdral, she told the girls, “Do your best.”

Hicks wrote, “We knew what that meant: If we pulled too much, straightening the material, her tiara and veil would slip. But if we didn’t pull enough, the effect of the train would be lost.”

DIANA HAD TWO WEDDING BOUQUETS…BECAUSE OF THE QUEEN

Florist David Longman told Express that after Queen Elizabeth lost the flowers during her own wedding, she started the tradition of having two identical bouquets made to prevent a similar mishap.

“We made two bouquets. The first one had to be delivered at 8 o’clock to Buckingham Palace. We had a police escort motorcyclist who took us all through the city to the Palace,” said Longman about Diana and Charles’ wedding. “Then we came back, and by that time they had finished the second bouquet and back we went again.”

THERE WERE SOME WEDDING DAY JITTERS

Nerves got the best of Princess Diana while she was saying her vows. She accidentally referred to her groom as “Philip Charles” rather than “Charles Philip.”

(But to be fair, his full name is Prince Charles Philip Arthur George. With so many names to remember, anyone would slip up!)

THE DRESS FEATURED A SECRET CHARM

Although it wasn’t visible in photographs, there was a hidden good luck charm in Diana’s dress: a 18-carat gold horseshoe trinket studded with white diamonds.

“[The dress] was the fulfillment of her princess fantasy,” wrote biographer Tina Brown, according to Vanity Fair. “She was insistent in her demand for its puffy sleeves and floating silk, its twenty-five-foot taffeta train, its nipped waist, and its antique lace embroidered with pearls and sequins.”

THEY WERE (KIND OF) READY FOR RAIN

In case of poor weather, Diana’s dress designer made a parosal featuring the same lace as the dress as well as hand-embroidered pearls and sequins.

However, the skies were clear for the big day.

“It was probably a good thing. It was made of such light material that it certainly wasn’t waterproof,” Elizabeth Emanuel told the Daily Mail. “It wouldn’t have done her much good!”

CAMILLA WAS IN ATTENDANCE

Despite Prince Charles and Camilla Parker Bowles’ dating history, she still made the royal wedding’s guest list — likely due to her husband Andrew Parker Bowles’ role as the Commanding Officer of the Household Cavalry Mounted Regiment.

According to the biography Prince Charles: The Passions and Paradoxes of an Improbable Life, Charles felt pressured into his marriage to Diana and was still torn abut his love for the then-married Camilla — and even cried over it the night before his nuptials.