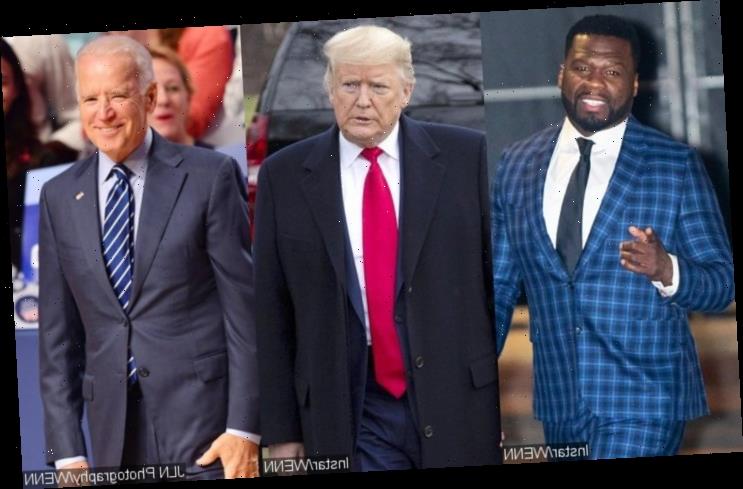 Making fun of his stage name, one person says, ’50 Cent voting for Trump bc with Biden’s tax plan he’d be 32 Cent and that just doesn’t have the same ring to it.’

AceShowbiz –50 Cent has a change of heart when it comes to the upcoming presidential election. The rap star apparently planned to vote for Joe Biden at first, but when he learned of the candidate’s alleged tax plans, he immediately took to social media on Monday, October 19 to offer his support for Donald Trump.

In a post shared on Instagram, Fiddy uploaded a photo of a graphic that showed Biden’s tax proposal, which included a 62.6% rate for California, from the CNBC program “Power Lunch”. Looking at the caption, it’s safe to say that this one issue alone is enough to make the “Power” alum vote for Trump. “WHAT THE F**K! (VOTE ForTRUMP) IM OUT,” he said. “F**K NEW YORK The KNICKS never win anyway. I don’t care Trump doesn’t like black people 62% are you out of ya f**king mind.”

His post soon made headlines, with a lot of people ridiculing him and making fun of his stage name. “50 Cent voting for Trump bc with Biden’s tax plan he’d be 32 Cent and that just doesn’t have the same ring to it,” someone wrote on Twitter. “Under a Biden tax plan 50 Cent would have to legally change his name to 19 Cent because that’s all he’d have left,” another similarly mocked him.

Meanwhile, an individual urged Fiddy to hang out with Chelsea Handler again “so she can smack this out of him,” adding, “This is such a detrimental fact-less thing to do/say. People really are selfish, stupid, idiots.” One more social media user said, “50 Cent doesn’t want to pay more taxes cause he’s an elite 1%. F**k him. It’s that simple. Rich people don’t care about those beneath them. Don’t support his music.”