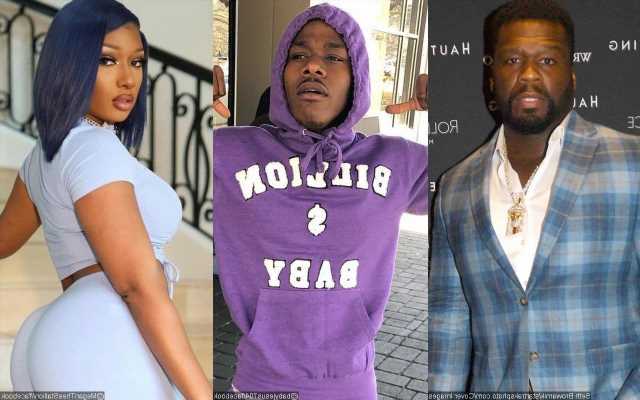 The ‘In Da Club’ hitmaker shares his two cents on the ‘Rockstar’ rapper’s claims that he slept with the Houston Hottie even on the day before she was allegedly shot by Tory Lanez.

AceShowbiz –50 Cent has weighed in on DaBaby‘s wild claims about Megan Thee Stallion. The “In Da Club” hitmaker shared his reaction on social media after DaBaby claimed that he slept with Megan multiple times.

On Friday, September 23, the 47-year-old rapper turned to his Instagram page to share a headline saying DaBaby claimed on his new song “Boogeyman” to have hooked up with the Houston Hottie, including the day before she was allegedly shot by Tory Lanez. “DaBaby says he slept with Megan Thee Stallion multiple times even the day before she was shot!!” read the headline. The Queens rapper then wrote, “WTF anybody seen the boogie man because i’m a need to hear this s**t right now!”

Shortly after listening to DaBaby’s new track, Fiddy, who has been mentoring DaBaby, hopped on Instagram again. This time, he included a video of him playing the song from his phone. In the caption, he said, “oh no, [man facepalming emoji] this s**t is crazy. The Boogie Man track 3 [fire emoji] Damn.”

50 Cent’s reaction came shortly after DaBaby released his new 14-song LP, “Baby on Baby 2” on Friday. The album features a track titled “Boogeyman”, in which the 30-year-old emcee, born Jonathan Lyndale Kirk, raps, “You play with me that s**t was childish/ The day before she said that Tory Lanez shot her, I was f**kin on Megan Thee Stallion,” referencing the incident where Tory was accused of shooting the “Sweetest Pie” raptress in Los Angeles on July 12, 2020.

The second part of the verse appears to be a call-back to his June 2021 back-and-forth on Twitter with Megan’s boyfriend Pardison Fontaine. “Waited to say that s**t on my next album/ Hit it the day before too/ But I kept it player, I ain’t say nothing ’bout it/ Had her pretty boy, boyfriend tweeting me, ready to die ’bout the b***h like a coward,” the “Rockstar” rapper spits. “I told you n***as don’t play, now you gone have to handle me/ I poked the muthaf**kin bear, I’m an animal.”

Neither Megan nor her boyfriend Pardi has responded to DaBaby’s diss track.