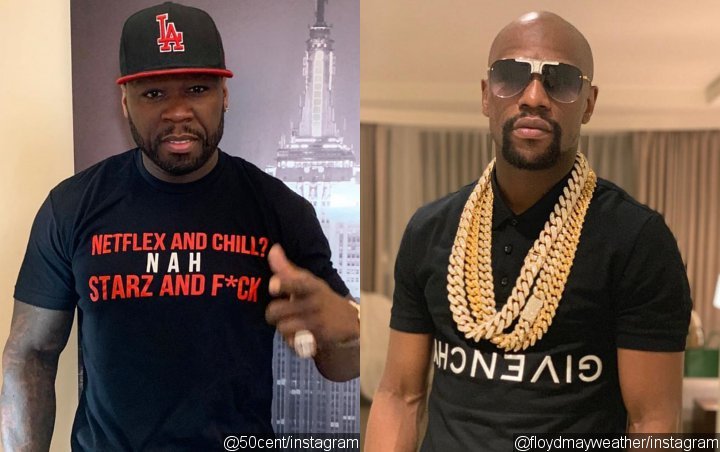 Prior to this, the ‘Power’ creator made fun of the former professional boxer for falling during a charity basketball game by tweeting, ‘Now you got ace bandage on ya ankle and s**t.’

AceShowbiz -It looks like 50 Cent just can’t stop trolling his nemesis Floyd Mayweather, Jr. After making fun of the former professional boxer’s massive Chanel purse, the “Candy” rapper shared on Instagram a fan-made video that featured Floyd showing off his wealth, only to be reminded by Fofty that he owed him money.

In the video, the boxing promoter was holding what he said a million dollars cash before the scene changed to show a picture of him together with Fofty. The latter said in a fake voice, “Hey, what you doing with all that money?…Now that I think about it, don’t you owe me some money man?” Totally flustered by the “Power” creator’s comment, Floyd replied in fake, high-pitched voice, “Come on now 50, I already paid you 50. You know I don’t owe you money!”

Fake Fofty didn’t take it too well and responded, “Hey champ, you got two mother-fing seconds to find that money, man!” In the caption of the post, the “In Da Club” hitmaker wrote, “LOL WHO DID THIS.”

This arrived just days after Fofty clowned Floyd over his giant Chanel purse, which was given by the late Karl Lagerfeld. Alongside an edited photo of the Michigan native holding his massive bag, Fofty wrote in the caption, “You can get the biggest Chanel bag in the store if you want it. I don’t think Lil Baby was talking about this dumb s**t you bought champ.”

Just hours later, Fofty took to Twitter to continue his trolling on Floyd, who fell hard during a charity basketball game. Sharing a video of the moment on the micro-blogging site, the 44-year-old wrote, “What the f**k champ, are you alright? Get the strap,the man tried to kill you. Now you got ace bandage on ya ankle and s**t. LOL.”

Floyd has yet to respond to the diss.