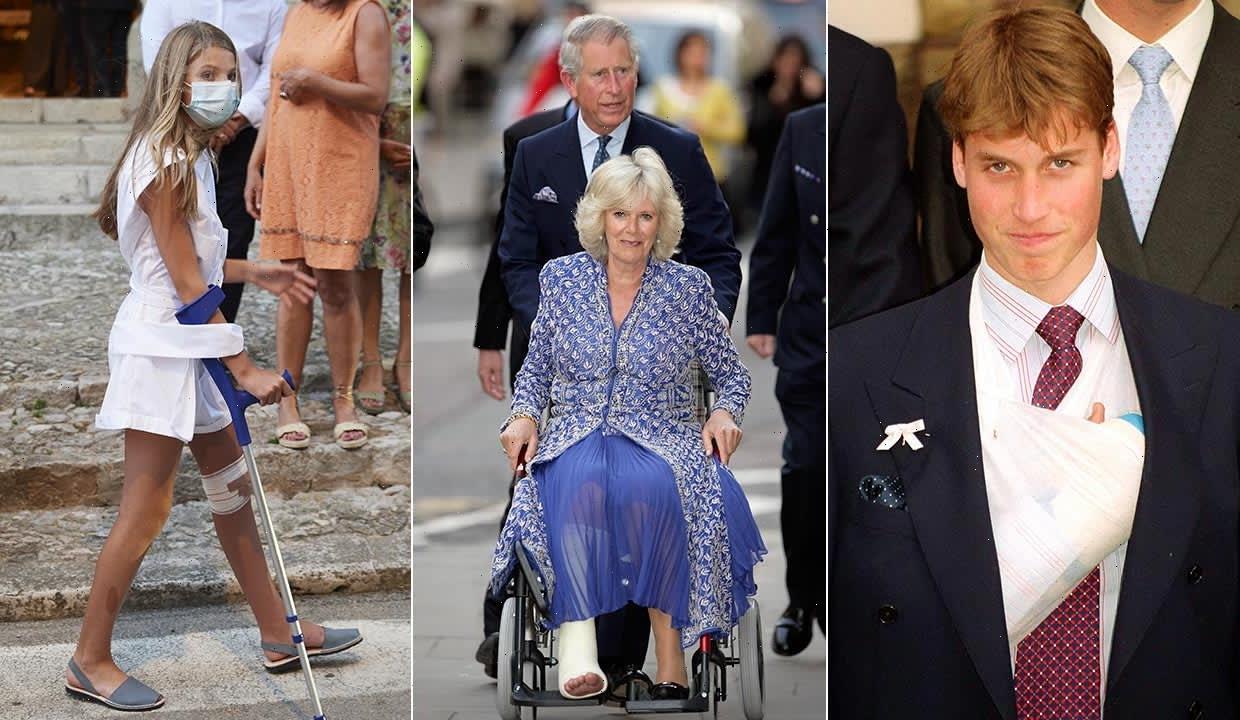 Despite being in the spotlight all the time, the royals are just like us: a little bit accident-prone! With the young royals growing up playing team sports at school and riding horses, such injuries are a natural part of life.

However, as they’ve turned their attention to exciting engagements and starting their own families, the royals have found themselves attracting a whole new range of scrapes and grazes. 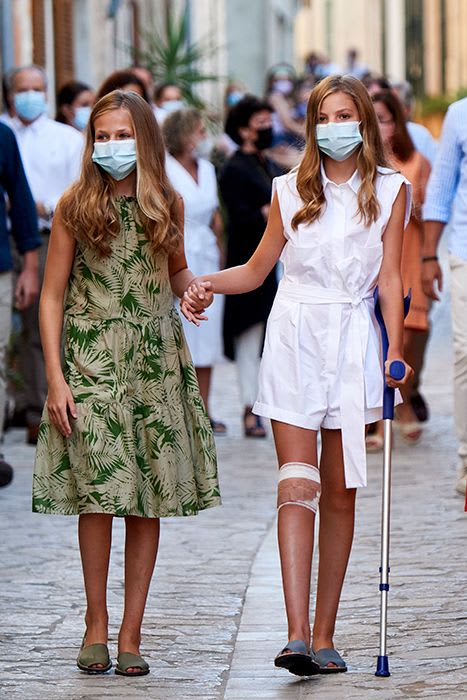 The youngest daughter of King Felipe and Queen Letizia of Spain was spotted sporting a painful leg injury in 2020. Sofia suffered a fall at the Spanish royals’ official residence in Majorca. She was treated at home to five stitches, bandaged up and given a crutch to help her support herself.

Sofia was spotted walking with her crutch during the family’s engagements in Spain, while also receiving a helping hand from her big sister and future queen, Princess Leonor.

MORE: The royal ladies who look chic in caped dresses and coats 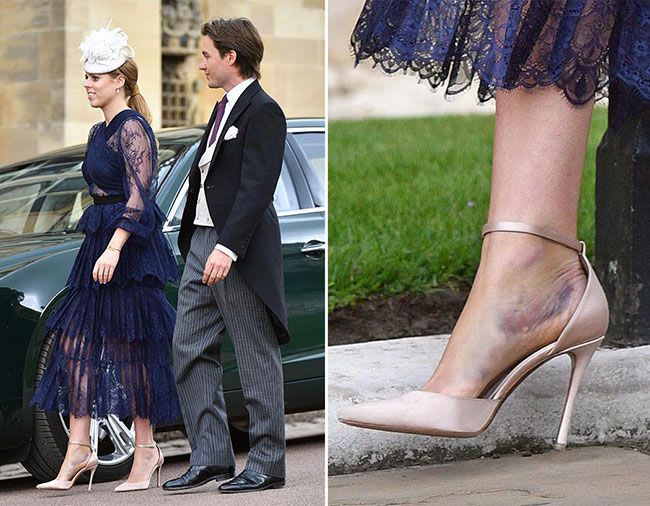 Princess Beatrice was spotted with a painful-looking injury on the side of her ankle, when she attended Lady Gabriella Windsor and Thomas Kingston’s wedding in Windsor in May 2019. The cause of the bruise was unknown, but it appeared to have happened just a few days before the wedding.

GALLERY: 13 times the royals have lost their temper in public

In 1999, Prince William sported a sling while attending the christening of his godson, Prince Constantine Alexios of Greece, in London. Aged 16, William was recovering from surgery on a broken finger but was in high spirits as he chatted with his fellow guests.

After breaking her left leg during a walking trip at Balmoral in 2010, the Queen Consort had to use a wheelchair. However, the royal didn’t let her injury stop her from attending her royal engagements, allowing her husband King Charles to push her around in her chair.

The Princess of Wales

The Princess of Wales is famous for her glossy locks, but Kate often styles her hair to disguise a large scar on her head. The inconspicuous scar along her hairline was confirmed by the palace to come from a childhood operation and matches her husband’s own forehead mark, which the Prince jokingly calls his “Harry Potter” scar.

Queen Maxima of The Netherlands

King Willem-Alexander’s wife sported a splint on her right wrist following an injury, during some of her royal engagements in September 2021.

Kate is often seen with plasters on her fingers which is unsurprising for a hands-on mum. The Princess enjoys baking and gardening on royal engagements, but she has revealed that cooking with Prince George and Princess Charlotte is one of their favourite activities. “They love making pizza because they can get their hands messy,” she said.

During the Duke and Duchess of Sussex‘s tour of Australia and New Zealand in October 2018, Meghan was seen sporting a plaster around her middle finger. This could’ve come from a number of the activities Meghan engaged with on her trip, including tree planting, cooking and even welly throwing.

In 2001, King Charles was forced to wear a makeshift eye patch during his public outings. Charles got a large amount of dust in his eye while sawing a tree in his garden, requiring the Prince to undergo hospital treatment.

King Charles also injured himself during a polo match in Cirencester, Gloucestershire in the summer of 1990. The Prince was seen leaving Cirencester Hospital with his wife, Princess Diana, after doctors bandaged his broken arm and placed it in a sling.

The late Queen has rarely taken time off from her royal duties during her reign, but even she wasn’t immune to the occasional injury. In 2003, she was admitted to hospital for keyhole surgery after tearing the cartilage in her right knee on a personal walking trip. In recovery, Her Majesty used crutches to get around and later in the year she underwent the same operation on her left knee. 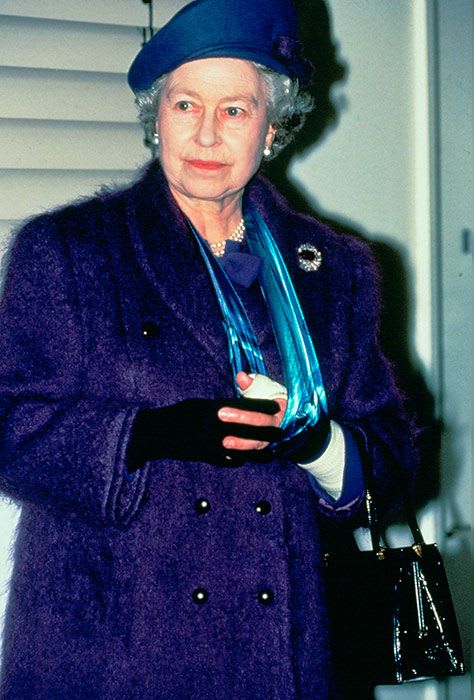 Known for her sense of style and love for bright colours, the Queen was never going to let an injury stop her from looking stylish. In 1994, she made a sling into the ultimate fashion accessory, supporting her injured wrist with a stylish blue silk scarf that perfectly matched her coat and hat.

The Duke of Edinburgh attended his grandson Prince Harry’s wedding to Meghan Markle without a walking aid despite suffering from a painful broken rib.

After falling off her horse during a three-day event for the European Championships in Kiev, Russia in 1973, Princess Anne was seen pairing her funky waistcoat with a makeshift sling to support her sprained wrist.

Just like her mother, Zara Tindall’s love for horse riding has led her to injury. As well as cutting her lip after a fall, over the years Zara has sustained a number of serious injuries including being knocked unconscious during an international competition in 2004.

As a rugby player, Zara’s husband Mike Tindall has known more than his fair share of painful injuries. But in 2008, the sportsman sustained serious internal damage after a horrifying accident left him writhing in pain during a match at Twickenham. Mike was forced to take a rest from the sport, retiring to Gloucestershire to walk his dogs and spend time with his family.

Throughout her lifetime, the ever-popular Queen Mother suffered from a number of health problems but remained resilient and robust throughout. In the 1980s, a number of nasty falls left her with painful leg impairments, causing her to walk with a stick for some time.

Make sure you never miss a ROYAL story! Sign up to The Royal Explainer newsletter to receive your weekly dose of royal features and other exclusive content straight to your inbox.