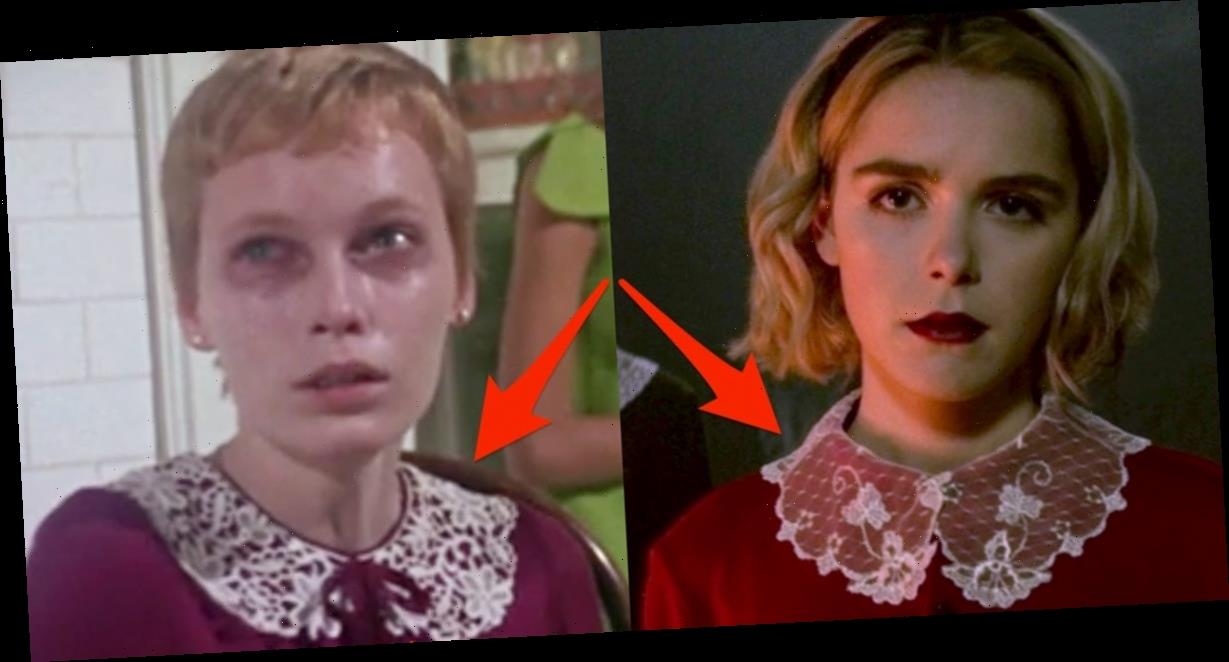 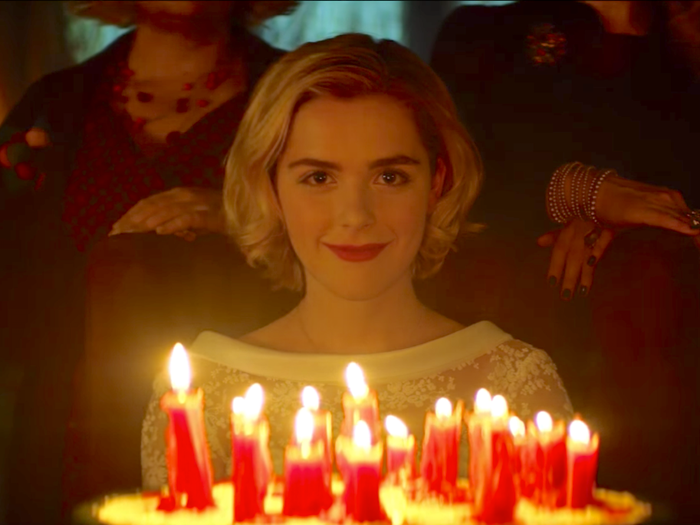 The fourth season of "Chilling Adventures of Sabrina" recently dropped on Netflix.

Before you delve back into the nightmarish world of Greendale, we rounded up 14 behind-the-scenes secrets and fun facts you probably didn't know about "CAOS."

The opening scene of season one was filmed in a special location. 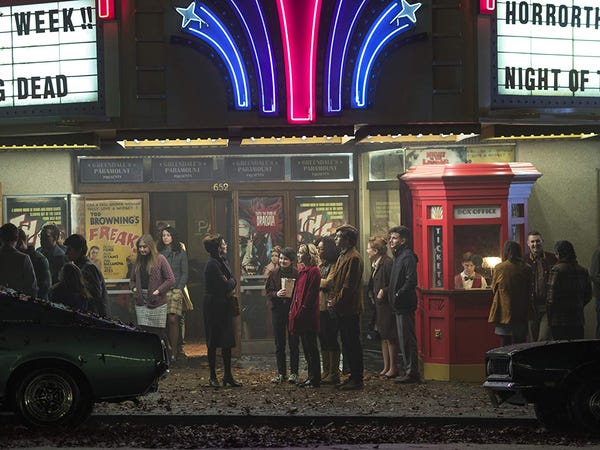 There's no loss of horror-film sentimentality on "CAOS."

In fact, the opening scene of the show was filmed in front of the same Paramount Theatre in Canada that appeared on Stephen King's 1990 TV mini-series "It."

"CAOS" takes place in the same universe as "Riverdale." 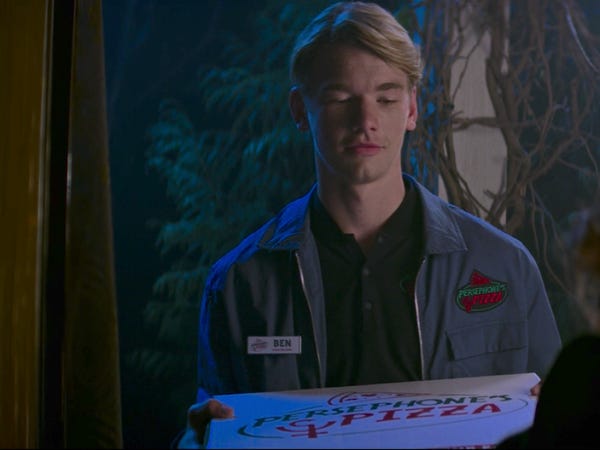 "CAOS" was originally supposed to premiere on The CW, the same network that currently airs "Riverdale," but was later turned into a Netflix original.

Nevertheless, as with the original Archie comics, "CAOS" takes place in the same universe as "Riverdale."

In fact, if you look carefully, you can spot hidden references to "Riverdale" on the show, including a poster hanging in Baxter High School and "Riverdale" character Ben Button delivering pizza to Ms. Wardwell. 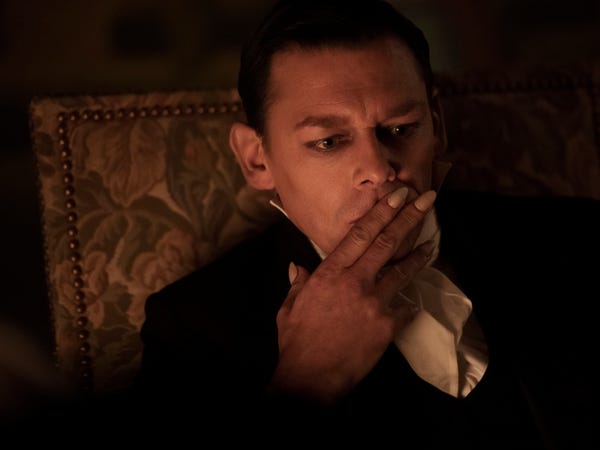 Unlike many of the characters on "CAOS," Father Faustus Blackwood — the high priest of the Church of Night — wasn't from the comics.

The character was created specifically for the Netflix show.

Father Blackwood is the Dark Lord's right-hand man, and his name has a special meaning. Faust (also called Faustus) is a character of German legend who sold his soul to a demon. The name is often used in literature and films to signify doomed, power-hungry characters.

Others have speculated that Blackwood may be derived from English author Algernon Blackwood, who specialized in ghost stories. 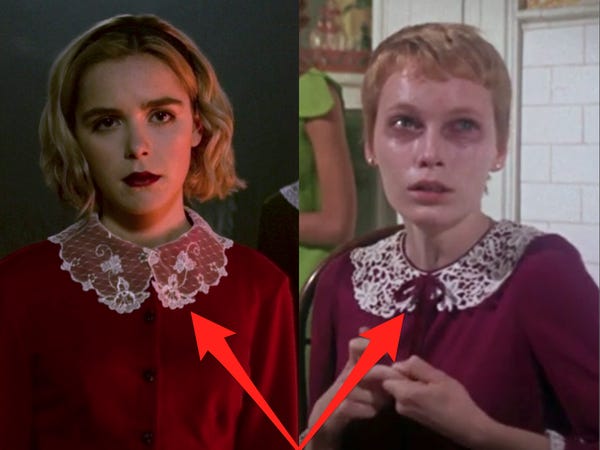 Throughout the first and second seasons of "CAOS," hidden references to popular horror films like "A Nightmare on Elm Street," "Beetlejuice," and "The Exorcist" have been spotted by eagle-eyed fans.

Most notably, Sabrina's bright-red dress with a delicate white lace collar seems to be inspired by Mia Farrow's costume in "Rosemary's Baby."

Each familiar in the series is given a symbolic name. 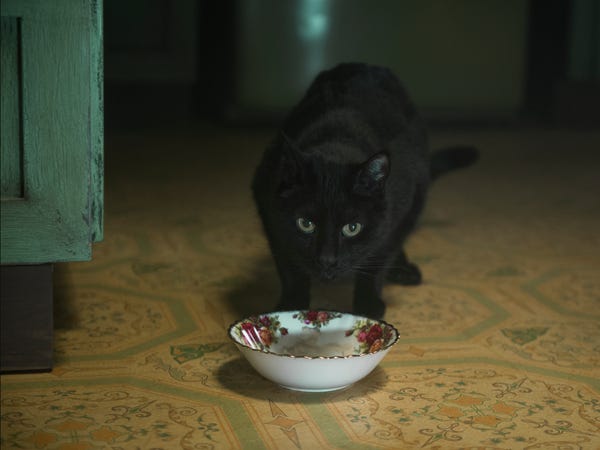 Each of the familiars on this show has a name with a special meaning.

For example, Sabrina's familiar, a black cat named Salem, is named for the town in Massachusetts known for hosting many of the infamous witch trials in the 17th century.

Mrs. Wardwell's familiar is a raven named Stolas — presumably after a demon in a spell book that is often referred to as "A Great Prince of Hell."

As Ms. Wardwell is technically Madame Satan, this is a particularly poignant name choice.

Salem doesn't get much airtime, partially because actress Kiernan Shipka is allergic to cats. 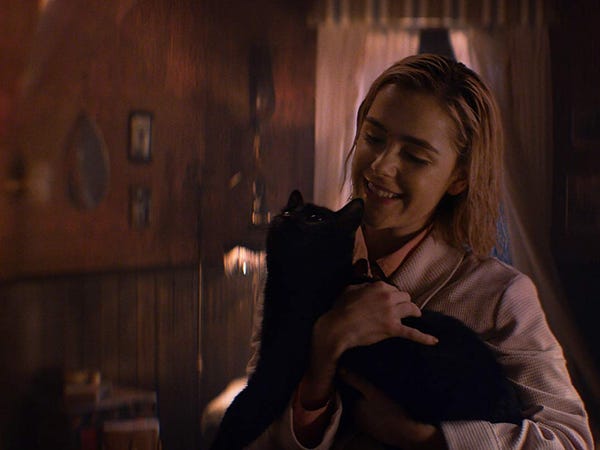 The lead actress told Vulture in 2018 that she was allergic to one of the five cats that portray her furry black friend, to the point that she developed hives while filming.

Because of this, showrunner Roberto Aguirre-Sacasa almost considered making Salem a dog.

Technology is limited in the Greendale world. 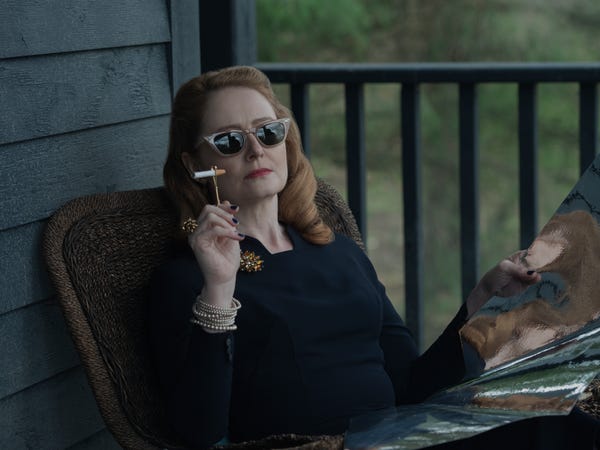 Aguirre-Sacasa has said that the only teen on "CAOS" who has a cell phone is Harvey, and if you viewers closely, they'll see that's true.

One reason for this is, like on "Riverdale," the showrunners want to keep the time period of the show relatively vague, embracing both modern social issues and the mid-century vibes of the Archie Comics.

The "Fearless Girl" statue was a major inspiration for this iteration of the series. 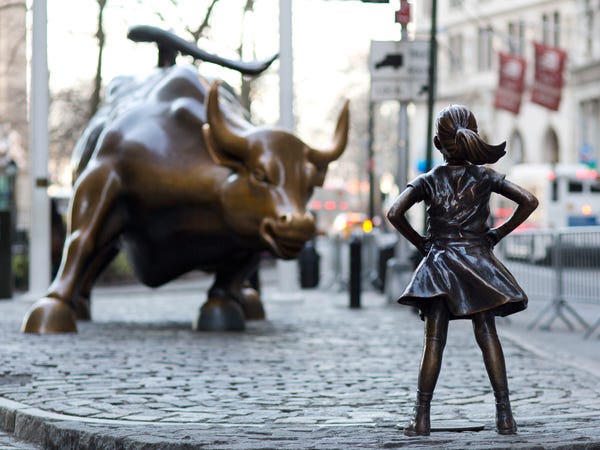 According to E! News, when Aguirre-Sacasa pitched "CAOS," he said that he had a very specific image in mind that inspired Sabrina's essence: the famous "Fearless Girl" statue in New York City.

"To me, that's what Sabrina was: a young girl unafraid to stand up against this giant evil and the patriarchy as symbolized by the Dark Lord and the high priest …" he told the publication in 2018. "That was the heart of the pitch, that image."

There is a real Pagan on set. 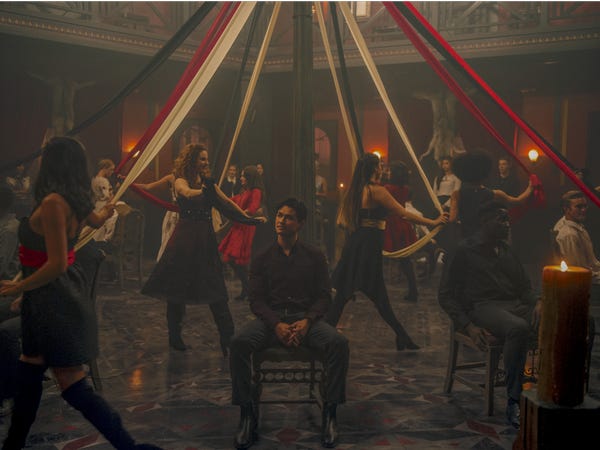 "CAOS" production designer Lisa Soper told Vogue in 2018 that she used her experience and knowledge as a pagan to help design the spell casting done on the show.

She even revealed that she cast a protection spell around the set of the house once it was fully constructed and that the cast members are careful not to disturb any crystals or sacred circles she used.

Many of the spells on set are real and rooted in history. 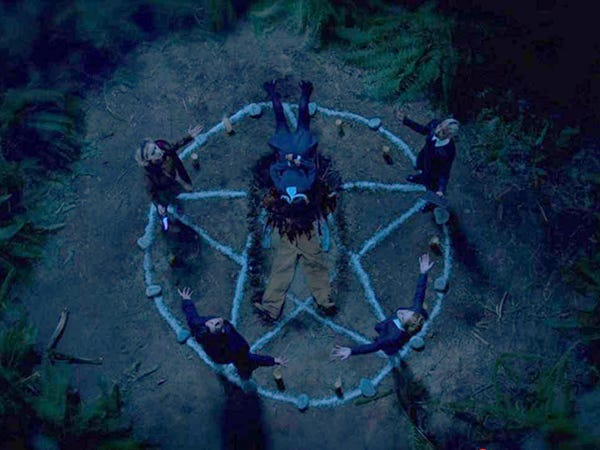 Soper told Refinery29 in 2018 that the spells used on set are rooted in history and are legitimate.

"All the writers and myself are very sticklery on the Pagan rituals," she said.

The spells were so authentic that some of the cast members were worried that something "otherworldly" would follow them off-screen after performing the spells on the show.

The Weird Sisters are inspired by Shakespeare's "Macbeth." 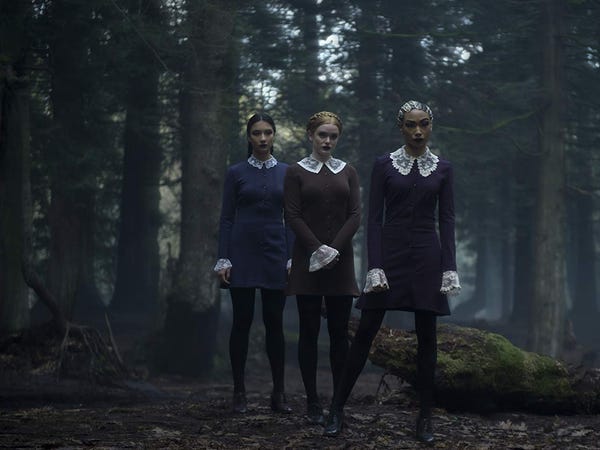 It's not too surprising that the Weird Sisters on "CAOS" were inspired by a group of witches of the same name in Shakespeare's "Macbeth."

The show's writers also used direct lines from the play (Act 1, Scene 3) as Sabrina's Weird Sisters-summoning spell: "The weird sisters hand in hand, travelers of the sea and land. Thrice to thine, and thrice to mine, and thrice again to make up nine. Peace! The charm's wound up."

Some people think the Spellmans might be related to another famous witch. 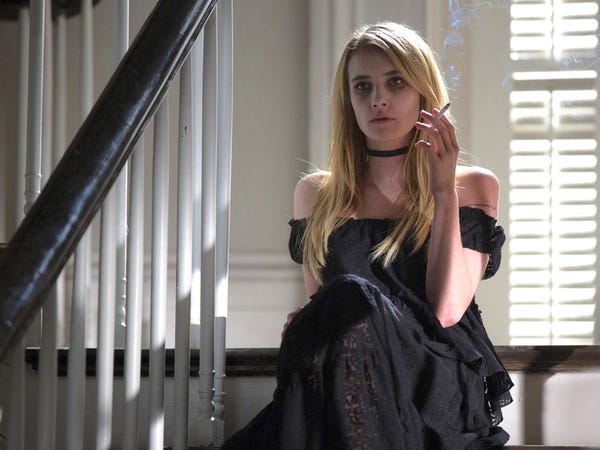 There are two theories abound about the mysterious movie-star cousin, Montgomery, that Hilda Spellman mentions on the first season of the show.

Some people believe that the Spellmans might be related to the movie-star witch Madison Montgomery from "American Horror Story: Coven."

Others, who believe in the show's mid-century aesthetic, think this mystery cousin might be a nod to the famous 1960s sitcom "Bewitched," which starred actress Elizabeth Montgomery. 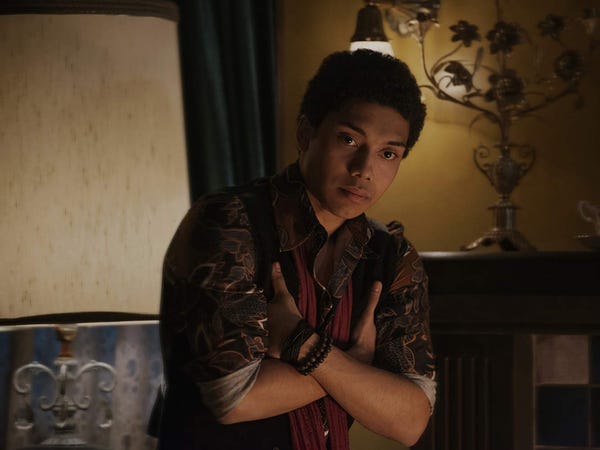 After the "Riverdale" audition process, Aguirre-Sacasa was able to write two roles for "CAOS" with specific actors in mind.

He wrote the role of Sabrina for Shipka after initially wanting to cast her as Betty Cooper on "Riverdale," and he did the same with the casting of Chance Perdomo as Ambrose after watching his audition for Jughead Jones. 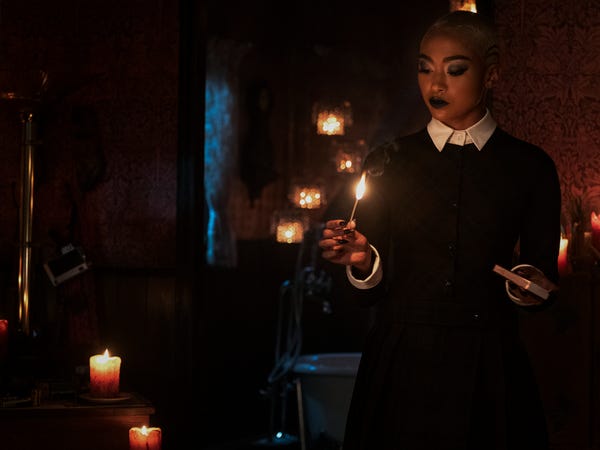 The show's introduction to the phrase "Hail, Satan" came from an improvised moment by Richard Coyle — who plays Father Blackwood — on season one.

Since then, the cast has adopted it as a clever dedication to the Dark Lord, along with Zelda's common use of the phrase "Praise Satan."

Although much of the cast and crew feel comfortable using this phrasing, Tati Gabrielle, who plays Prudence, has said she's uncomfortable saying the words because of her Baptist background.

The actress told Thrillist in 2018 that she instead uses the phrase "curse you" as opposed to "bless you."

She also said she recites an "Our Father" prayer before every scene that her character has to cast Latin spells.